A while back, Aldous \ Walker LLP represented a truly neat and interesting guy who worked as a Hollywood stuntman. Among other things, he was Chuck Norris’s stunt double on the TV series Walker, Texas Ranger as well as in many of Norris’s movies. His name was Kinnie Gibson.

Unfortunately, Kinnie Gibson died in 2015 because of a delay in diagnosis of a tumor in his chest that led to his ultimately fatal brain cancer. A radiologist saw the tumors on a chest X-ray, but the hospital never called Kinnie to let him know about the tumor, and he was never told about it in time. He never received the potentially life-saving treatment he needed. Fast forward over a year, and it was too late. Kinnie put on a noble fight, but he ultimately succumbed.

“Following high school, Kinnie began his ballooning career and soon found himself flying corporate balloons for Mickey Gilley, and touring Australia with Evil Knievel,” wrote his obituary in the Dallas News. “Later Kinnie would use his ballooning skills to start a Hollywood Stunt career flying hot air balloons in Disney's "Night Crossing" then go on to receive the "Best Aerial Stuntman" award for his filming on the TV series "Fall Guy".” 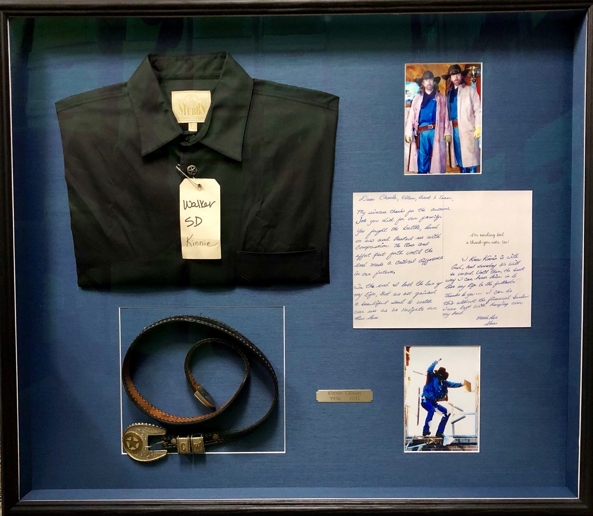 Kinnie’s shirt, belt, the letter, and photos of the stuntman in action.

We ask our clients to send us something to remember them by once the case is over, and his wife Sheri was kind enough to send us a keepsake that included a card, and a shirt and belt that were part of Kinnie’s Walker Texas Ranger costume. We put it in a shadow box that will soon hang on our office wall.