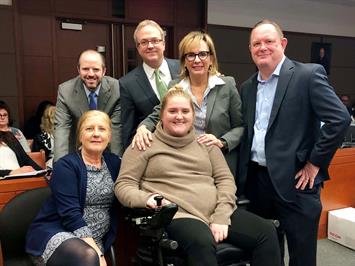 Aldous \ Walker Partners Charla Aldous and Brent Walker, along with PayneMitchell Law Group Partner Jim Mitchell, were recently successful in obtaining a $37.6 million verdict on behalf of a local woman who was seriously injured and paralyzed while she was a passenger in a Honda Odyssey minivan.

The multi-million dollar verdict, awarded by a Dallas jury on Wednesday, February 13, 2019, put an end to a nine-day trial over claims that Honda’s poorly designed seat belt failed to properly protect our client, and contributed to her serious injuries.

The jury’s award apportioned fault and liability as follows:

Although the underlying wreck occurred when our client’s Uber driver ran a red light and was struck by a pickup truck, the jury’s finding of Honda being 63% liable for the resulting damages puts the automaker on the hook for the entirety of the $37.6 million verdict, per Texas’ comparative apportionment statute. Under that law, liable defendants found more than 50% at fault are “jointly and severally liable” for a plaintiff’s damages (TX Civil Practice & Remedies Code Section 33.013).

A Difficult Case. A Triumphant Result.

The verdict is a significant victory for our client, 27-year-old Sarah Milburn. On the evening of November 15, 2015, during a break from her studies at Oklahoma State University, Sarah and her friends picked up an Uber in Dallas. The driver arrived in an uninsured Honda Odyssey minivan, and later ran a red light, which caused the van to be struck by another vehicle before it rolled over onto its side and its top. Sarah suffered catastrophic injuries as a result of the collision, including a broken neck that left her quadriplegic and in need of 24/7 care from her parents.

Though the matter involving Uber’s liability has been resolved, it was our claim in this trial that the seat belt in the Honda Odyssey minivan was poorly designed, and that it contributed to Sarah’s life-altering injuries.

As noted during trial, the seat belt system used in the third row of the minivan, where our client had been seated at the time of the crash, was designed in a way that made it difficult for many passengers to use. We argued Honda’s two-part seat belt system requiring passengers to anchor a detachable shoulder strap from the ceiling of the van, and then pull a belt across their hip to buckle it, was awkward and unfamiliar for most people unfamiliar with the minivan.

To illustrate this, we conducted our own independent tests. During trial, an expert showed members of the jury the findings of that test, which indicated less than 10% of people unfamiliar with the two-part seat belts were able to properly use them. That meant 50 of the 53 people who took part in the study failed to use the seat belt in a proper manner. We further argued that wearing it as they did was also more dangerous than not wearing a seat belt at all.

"What Honda said is, we met all federal regulations, and guess what? They did. But this jury found those federal regulations were not sufficient. What the jury understood is that it’s not enough to just equip a car with seat belts – the carmaker also has to make sure people can and will use them safely. Sarah put the seat belt on the same way 50 out of 53 people in our studies did, and wearing it that way was actually more dangerous than having no seat belt at all. The family is hopeful the jury's finding will lead to the creation of ‘Sarah's Law,’ which would forbid automakers from using this seat belt system in the future.”

Attorney Aldous notes that while the result ensures our client will now have the justice and compensation she deserves, it may also play a crucial role in raising awareness about the dangers of these seat best systems. That awareness could help prompt needed changes to the status quo, and protect others from suffering similar tragedies in the future.

You can learn more about the case and verdict, which has garnered considerable media attention, from the following articles:

For more information about our national trial lawyers at Aldous \ Walker or our civil trial practice, call (214) 307-6307 or contact us online.